Welcome to the website of Janine Ashbless. I'm a writer of fantasy and paranormal erotica and - more rarely - scorching romantic adventure. I like to write about magic and myth and mystery, dangerous power dynamics, borderline terror, and the not-quite-human. And hot filthy sex, obviously...

An anthology of post-apocalyptic erotica

Romance Novel: third in the Book of the Watchers trilogy

The third in my fallen angel trilogy, The Prison of the Angels, has been released by Sinful Press!

To my absolute delight I am immortalised on the "Islands of Erotica" in the Map of Literature by artist Martin Vargic. You should so buy this awesome best-seller of a book!

For your shelf-ish desires 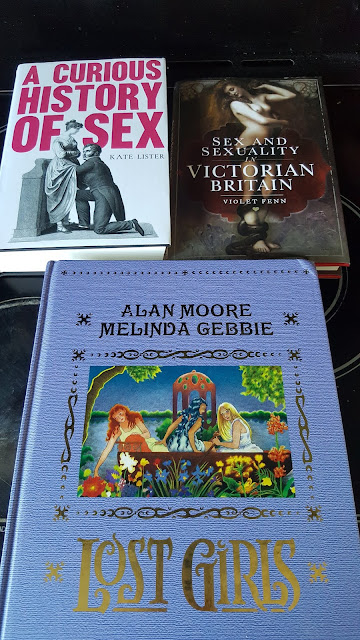 I thought I'd pop in with some recommendations for scurrilous books I've been reading under lockdown. First, a couple of new ones:

A Curious History of Sex is by Dr Kate Lister of Whores of Yore fame and it's a publication I backed on Kickstarter. Sex and Sexuality in Victorian Britain is by our international goth correspondent Violet Fenn and has just been released this last week. Both are easy-reading non-fiction, written with wit and a real fondness for their subject matter, and are to be recommended for any historian's bookshelf. Buy them and annoy your friends by reading out Interesting But Dirty Facts 😉😉😉

Buy A Curious History of Sex
Buy Sex and Sexuality in Victorian Britain
Not so new is the immense graphic novel Lost Girls, authored by my writing hero Alan Moore and painted by Melinda Gebbie. Originally an extraordinarily expensive trilogy that has been out of print for a few years, it's now a single-volume edition (with extra material) currently on sale via their eBay shop at an astounding £20 (+P&P)!

"Vivid and tempestuous and dangerous, and bursting with sacrifice, death and love." (Portia Da Costa)

"One of the most talented, original and brave authors in the erotica field" (Shanna Germain)